We Are Daisy Wikia
Register
Don't have an account?
Sign In
Advertisement
in: Navigation, Games, Sports games,
and 11 more

Daisy has appeared in more than 70 games to date, from 1989 to 2021! She is the second most prominent female video game character in terms of appearances, only behind Princess Peach. As one of the most iconic Super Mario characters, she has had several main roles in various fan-made games and other licenses don't hesitate to use her image. She also is a subject of numerous mods which allow her to be present in some games in which she isn't officially.

Below are some general series of games that Daisy has appeared in. For a detailed list of each individual game, please scroll down beyond this section.

Mario & Sonic at the Olympic Games

Here are Daisy's appearances in the games created by Nintendo and/or playable on Nintendo systems (with sometimes Sega, Camelot or Hudson for example).

Here are other games, movies, books and "official" media in which Daisy appeared.

Daisy has been featured at least twice in Super Mario-Kun. She appears in a 4-koma strip with both Mario and Peach. Peach yells at Mario, jealous of the relationship between him and Daisy. Daisy also appears in Volume 26 of Super Mario-Kun, where she appears in Luigi's imagination.

Daisy in a 4-koma strip

Kodansha's Super Mario, also known as KC Mario or Kodansha Deluxe, was a Mario manga published during the late 1980's all the way to the late 1990's only in Japan. Throughout the manga series, Daisy was a recurring character. She has a friendly rivalry with Peach, as both of the princesses have crushes on Mario.

Daisy appears several times in this manga series based on Mario Party 4:

In September 2017, Daisy appears alongside Peach in the Shop section of the website:

For Halloween in 2018, Daisy appeared along with Peach and Rosalina as a Mushroom Kingdom Heroine who knows how to shine:

Daisy ​​(portrayed by Samantha Mathis) appeared in the Super Mario Bros movie as one of the main protagonists. Her design and personality resembles that of Princess Peach's, but she and Luigi share an interest in each other. This is the first time Daisy and Luigi have a romantic relationship.

Mario Hanafuda is a deck of Japanese playing cards. It has been created for the 30 years of Super Mario. Daisy has her own card, she's referenced in the month of March as one of the main women of the Super Mario universe (along with Peach, Toadette and Rosalina).

Daisy is present on the Mario character's screen theme. 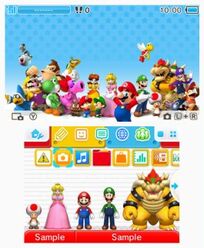 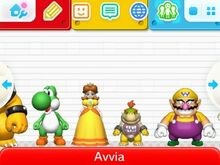 Nintendo featured Daisy along with Peach and Rosalina during mid-2018 on a post from their official channel, telling that she is a leading lady:

Nintendo also featured on this same channel a picture of Daisy and Luigi advertising the teamwork in Super Mario Party... Another official Luaisy teaser?

Daisy also appeared in the Game Boy comics in her old style; she's held in captivity by Tatanga and calls for Mario to save her.

Daisy and Peach's artwork from Mario Kart: Double Dash!! is featured on one of the pages in the Guinness World Records: Gamer's Edition 2017. 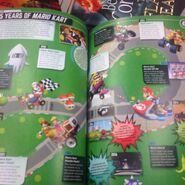 The cartoon show known as MAD had a segment which featured several video game characters, mainly from Nintendo. None of the characters resemble their actual appearances, including Daisy. Instead of her usual yellow and orange dress, Daisy wears a green dress and her hair is brown. One episode had a segment named Diary of a Wimpy Kid Icarus, a crossover of the Diary of a Wimpy Kid books and Kid Icarus. Daisy appears twice in the segment. She doesn't have a speaking role, but she is heard laughing with Princess Peach and Princess Zelda.

Daisy is seen alongside Peach and Zelda. They are first seen eating lunch in the cafeteria, and the main characters Pit and Kirby want to eat lunch with them. Peach says that they can eat with them if they get Bowser, Wario, and Ganon to stop bothering them.

Daisy is seen again at the end of the segment after Pit defeats Mega Man, Sonic, Pikachu, and Donkey Kong in a Super Smash Bros-like battle.

You can watch the full segment here.

Daisy in Diary of a Wimpy Kid Icarus

The Line Messenger App has released several different sets of Mario stickers. In October 2017, the Super Mario's Relaxing Life series of stickers was released. Daisy appears in two of these stickers. One sticker depicts her reading a book while looking bored, and the other sticker depicts her and Peach taking a selfie. Daisy also appears to have a tan in these stickers, something that hasn't been since the late N64 era/early GCN era.

Daisy is present three times on the official 2018 Nintendo calendar :

Daisy is one of the 9 highlighted characters, described as a memorable character.

It is a cheese-themed park located in South Korea that features various character statues and Daisy is one of them.

Daisy received a new 2D render visible in an official Nintendo calendar, and she's also present on the Super Mario Japanese 2020 calendar along with Peach and Rosalina:

Daisy appears in two of the artworks featured in this official book, the most surprising one shows Daisy having a conversation with Wart. 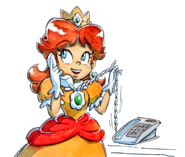