This is a list of Princess Daisy's powers and abilities used throughout her appearances.

In Mario Party 3, Daisy was shown to have a considerable amount of strength, as she was capable of sending Bowser flying with the flick of a wrist.

In Mario Party: Star Rush, Daisy's ability was for her to "Cause flower buds to bloom" to release coins. She shares this ability with Peach and Toadette. She also has her own dice block, the Friendly Dice Block. This dice block would get a 3, 4, 5 or a number equal to the number of allies you had in your party.

These games have also shown Daisy to be skillful with weapons and items such as hammers.

In Mario Kart: Double Dash!! Daisy and Peach's special Item is the Heart. Once activated, a circle of hearts will rotate around the car. When a opponent's item approaches Peach or Daisy while this item is in use, the hearts will absorb the item, giving it to Peach or Daisy's. then they are able to use that item again. The Heart will disappear after absorbing 2 items.

Flowerbed Return is Daisy's Defensive Power Shot in Mario Power Tennis. Daisy summons a bed of flowers leading to the location of the tennis ball, Daisy leaps over the flower bed and hits the ball, returning it to the other side at average speed. She is also classified as Technique.

Flower Shot is Daisy's Special Shot in Mario Hoops 3-on-3. It is performed by tapping out a triangle twice. Daisy begins by dribbling the ball in a triangle while a small field of flowers grows at her feet. She then spins in the air and casts the ball into the hoop. If Daisy is touched while performing this move, the other players will lose some of they're coins.

Daisy's central abilities are her flower-oriented abilities, through which she can create gardens complete with fences and cover her hands in flowers in a similar manner to pompoms to block and attack projectiles.

In Super Mario Strikers, Daisy's Super Strike is the Torpedo Strike. She will kick it high in the air and proceed to shoot it dizzying the goal keeper.

The Crystal Smash! or Crystal Ring! is Daisy's Super Ability in Mario Strikers Charged. Daisy punches the ground summoning a ring of sharp orange crystals to come out of it, knocking out anyone near Daisy.

When Daisy performs her Mega Strike, Crystallized Daisy, she jumps high into the air. She leaves a trail of blue diamonds as she turns mostly black and blue and her eyes fully blue. The background turns blue as she clenches her fist summoning the blue crystals while raising her hand. Then she punches the ball towards the goal by emitting the blue shining crystals.

Flower Ball is the name of Daisy's Special Ball in Mario Superstar Baseball. Daisy throws the ball with many flowers scattered on it. This is meant to disguise the ball and confuse the batter. This is an attempt to confuse the players on the field.

The Flower Ball returns in Mario Super Sluggers as Daisy's Star Pitch. If the batter hits the ball while it is under the flower affects, it will fly at a high angle and usually won't go very far, making it very likely for the batter to get an out. A player can counter by using a Star Swing. Daisy's Star Swing has her bat sprout a flower on the end. When she connects with the ball it pops onto the outfield and a flower garden will grow. The fielders will have to wait until the ball lands in order to retrieve it. Fielders who can levitate such as Boo can still catch the ball however.

In the 3DS version of Mario & Sonic at the Rio 2016 Olympic Games, Daisy can use a special move. Once used, a giant orange glowing heart quickly expands through the entire screen, where several other small orange hearts appear shortly after.

Disclaimer: The Super Smash Bros. series is not canon to the Super Mario franchise. Therefore, the abilities Daisy only exhibits in these games likely cannot be used by her in canon.

Daisy and Peach are practically identical in abilities in the Super Smash Bros. franchise, considering that Peach is the base fighter for Daisy's moveset in Super Smash Bros. Ultimate. As such, both characters are equipped with magic and have magic sparkles accompany many of their attacks (examples: Dash Attack, Up Tilt and Forward Air). Most notably, Daisy has the ability to create rainbows and use then as a form of defence.

Daisy has the ability to levitate for about 2.5 seconds and can use her parasol to float as well. In her Final Smash, Daisy Blossom, Daisy displays many abilities, including her flower manipulation and sleep inducement.

While she doesn't use this in her moveset, Daisy displays the ability to teleport, which she uses in her intro. 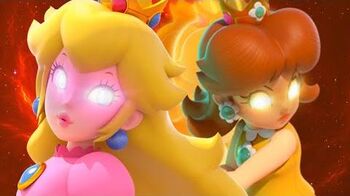 Retrieved from "https://we-are-daisy.fandom.com/wiki/Daisy%27s_Powers_%26_Abilities?oldid=53808"
Community content is available under CC-BY-SA unless otherwise noted.