Daisy Circuit is a course which first appeared, and so far has only appeared in Mario Kart Wii. It is the first course of the Star Cup and Daisy's second personal race track in the Mario Kart series.

Daisy Circuit is a track that leads through a seaside resort. It is sunset. Daisy Cruiser can be seen in the background of the course. On the sides of the track, various Piantas, Toads, Shy Guys and Miis are cheering for the racers. At the side of the starting line is also a big tribune.

The track starts with a straight part, followed by some sharp turns. After this, you reach two roundabouts, with in the middle of the first one Daisy and Luigi dancing, and in the middle of the second one Baby Daisy and Baby Luigi playing together. Then you'll go into a tunnel. After the tunnel, the course features a hairpin turn around the lighthouse. Then there is a left turn, followed by the finish line.

There is only one shortcut on Daisy Circuit: just before the roundabout part, stairs can be accessed with a mushroom (you'll slow down a lot if you don't use one), then you'll be able to do a trick off a ramp.

Baby Daisy & Baby Luigi, with behind the small hills which could be related to Muda Kingdom

Hairpin turn around the lighthouse

Aerial view of the course

If we assume that Daisy's room is behind the middle window on the first floor, then her view would look like this.

View from the lighthouse 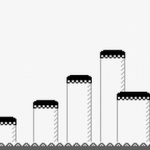 The small hills in Muda Kingdom