As of its most recent appearances, Daisy's emblem has consistently been shown off with a blue-green filled in circle in the center, surrounded by a dark green circle outline, accompanied by six yellow petals which are themselves surrounded by a dark orange outline. This depiction of Daisy's emblem was first seen in Mario Tennis for the Nintendo 64 on Daisy's tennis racket. The emblem commonly shows up in various games. It can often be found somewhere on Daisy's vehicle in the Mario Kart series. In Mario Sports Mix, Daisy's logo can be seen on the field of Daisy Garden. In the Mario & Sonic series, all characters, including Daisy, have their emblems on flags, which can be seen in the crowds. Baby Daisy's emblem is largely the same, but as of Mario Kart 8, it has additional white petals around it.

As mentioned above, Daisy's emblem usually has a green center with yellow leaves around it.

In Mario Strikers Charged, the center of the flower is yellow and the petals are some kind of green/turquoise. Additionally, there are eight petals instead of the usual six.

Daisy Hills in Mario Kart 7 would show off a flower with six petals outlined in white, with a yellow circle in the center, on top of an orange background. Interestingly, no green is present in this depiction of her emblem.

Daisy Hills features another altercation to the emblem in which the emblem has a green center with orange petals. It can be found on doors near the village portion of the track.

While Daisy's emblem appears in it's normal form on her soccer and baseball emblem, Daisy's emblem on her sports equipment such as the Flower Racket have a variation of Daisy's emblem with only four flower petals as opposed to the usual six.

This variation of Daisy's emblem is seen on a stamp. It has the usual design with six leaves but lacks color.

Daisy's emblem appears at the center of the top and at the bottom of her different Final Smash screens. The emblem's center is significantly larger than usual and the petals are smaller as well. It is made of light and is completely golden instead of having a green center. 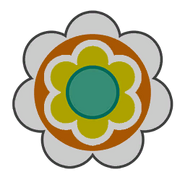 Daisy's emblem can be seen imprinted in the writing pad of a specific minigame from Mario Party: Island Tour
Add a photo to this gallery

☀ Daisy's emblem could be the emblem of Sarasaland too. On Daisy Circuit, all buildings are decorated with a flower emblem, which suggests that it may be a recognized symbol across the globe.

☀ People may mistakenly refer to the flower in Daisy's modern emblem as a daisy. However, daisies don't usually have yellow petals. The closest resemblance to a real daisy would be the emblem from Mario Strikers Charged.

☀ In Mario Kart 8, another coloration for her emblem can be seen in Royal Raceway on her hot-air balloons: Blue-green heart but white petals. It is the same as her jewel and earrings. In Sweet Sweet Canyon, on the galleries, her emblem has a big center and more little petals (it isn't colored).

☀ In Super Smash Bros Ultimate, Viridi even mentions Daisy's emblem in Palutena's Guidance Secret about the princess of Sarasaland. Viridi tells that it is cool she has a symbol that is also her name.

Retrieved from "https://we-are-daisy.fandom.com/wiki/Emblem?oldid=50786"
Community content is available under CC-BY-SA unless otherwise noted.