Mario Kart 8 was released for the Nintendo Wii U on May 30th, 2014. In this game, Daisy is a default character for the second time since Mario Kart: Double Dash!!. Baby Daisy comes back after 6 years of hiatus and is also a default character, for her first time overall (she had to be unlocked in her first Mario Kart game, Mario Kart Wii). In this version of Mario Kart, bikes return, and Daisy's biker outfit returns whenever Daisy rides a Bike and, in addition, whenever she rides an ATV, a new type of vehicle introduced to the series.

Daisy is a Middleweight character, along with Mario, Luigi, Princess Peach, Yoshi, Ludwig, Iggy, Tanooki Mario, Cat Peach and the Villagers. Daisy, Peach and Yoshi are grouped together as the lighter middleweight characters. Baby Daisy is a lightweight and is part of the lighter group of lightweights. She shares her stats with the rest of the baby characters as well as Lemmy Koopa. Mario Kart 8 does not have any hidden stat bonuses, classifying Daisy as an All Round character type as she is in the Middleweight class. Daisy is a bit slower and lighter than the heavier middleweights, but she has better acceleration, handling, and traction.

The official image on DeviantArt by FatalitySonic2 has Daisy on the image called "Mario Kart 8 Princess Daisy". When you click on this tab, you'll see Princess Daisy's artwork from Mario Kart 8. After that, the image becomes static and the page content loads.

The Daisy Cruiser, while not featured in the game as a playable course, can be seen in the background of Yoshi Circuit (GCN).

Daisy does not own a specific course in Mario Kart 8, but Daisy is referenced in several courses. In fact, not many of the new tracks are named after characters and have more generic names.

Towards the end of the course, there are two paths that can be taken. One of the Peach and Daisy's Royal Patisserie shops is located right by these two paths. Four Princess ORANGE shops are present, two being a part of a bigger building and two of their own..

The sponsor Princess ORANGE can be seen on a tower in the background of Toad Turnpike (N64):

Royal Raceway is a course that originates from Mario Kart 64 and it belongs to Princess Peach. While the original version of this course from Mario Kart 64 didn't reference Daisy at all, the updated version in Mario Kart 8 does. Right at the beginning of the race on the right, Daisy can be seen on a "Women Racing Organization" sponsor along with Peach and Birdo. Daisy is placed right beside Peach. This sponsor can be seen a second time later on in the course. The Peach & Daisy Royal Patisserie sponsor also appears a few times.

The most notable reference however are the hot air balloons designed after Peach, Daisy and Rosalina. Daisy's hot air balloon is yellow with orange parts above and underneath the balloon. Above the orange part ends with a white one. Her emblem but with her jewels colors is painted on it and there are a lot of more little emblems painted in orange on the yellow part. Toads are also seen cheering in the hot air balloons.

The hot air balloons from Royal Raceway are seen in this course.

In the background of Ribbon Road, there are many scattered toys across the floor of the room. There are also a few boxes containing games and toys. Of interest, some boxes contain 1/7th scale version

of some of the karts in Mario Kart 8. The third box in the collection, No. 003, contains a 1/7th scale replica of the Biddybuggy. The box can be found on the floor near the gliding section just before the player enters the Peach's Castle themed section, where the Biddybuggy presumably comes in separate pieces in a box of which a person can assemble. A picture of the finished product is shown on the side of the box, showing Baby Daisy next to a yellow Biddybuggy with Baby Daisy's emblem on it.

A large yellow Biddybuggy, presumably built and the finished product from the box, can be seen on the waving ribbon portion of the track shortly before the described section above. Oddly enough, this one seems to belong to Daisy as the emblem depicts a singular flower, instead of the repeated flower characteristic of Baby Daisy's emblem.

Super Bell Subway is a downloadable content course that surprisingly is chock-full of references to Daisy. Peach and Daisy's Royal Patisserie appears as a sponsor yet again in this course, like Princess ORANGE (several times).

A bottle with a Peach & Daisy Royal Patisserie logo on it (pictured right)
Add a photo to this gallery
Later on in the course, players enter the subway's underground tunnel, and race alongside subways. Just before the exit of the tunnel, on the right hand side, one can see on the ceiling a shadow of Daisy riding a bike. The image of Daisy's shadow is the same as the image shown of Daisy on the loading screen. Shadows for Waluigi's icon and Peach's icon trail after Daisy's, however outside of these three characters no other shadow icons in this fashion appear on the course.

Daisy's silhouette
Add a photo to this gallery

Outside of references to Daisy, Super Bell Subway is a unique course in which it shows the locations of certain tracks and locations. Two particular elements show off these places: a map hung on the wall, and an outline of the subway's track-line. The map shows off many attractions, such as MUSHROOM BEACH. Of particular interest, the map says Princess ORANGE is located at C4 on the map. This most likely marks the map of Princess ORANGE's production building or headquarters, although it is unclear what it is definitively mapping in relation to Princess ORANGE. Unfortunately, the map proves difficult to read, and it does not appear Princess ORANGE can be found in the section C4. It is possible Princess ORANGE is located in C4, but that part of the map was cut out.

Sweet Sweet Canyon features an all new sponsor: Peach & Daisy Royal Patisserie. This sponsor can be seen several times on Sweet Sweet Canyon. It can be also spotted in a lot of other circuits too, such as N64 Royal Raceway, Toad Harbor, Super Bell Subway, GCN Yoshi Circuit, GCN Baby Park, on various menus, billboards and signs. Toad Harbor even shows off that Peach & Daisy Royal Patisserie has its own shop established! The sponsor itself depicts a crown with three jewels in the shape of flowers, with two circular jewels on either ends. The color of the jewels alternate between pink and light blue.

Perhaps the most prominent sponsor of Daisy's is Princess ORANGE, which appears on a large number of courses throughout Mario Kart 8. Of note, Sweet Sweet Canyon reveals that Princess ORANGE can come in green bottles, which compromises the underwater section of that course. The sponsor itself showcases Daisy's emblem on top of an orange.

A less frequent sponsor that shows up sometimes is WOMEN OF RACING ORGANIZATION, which can be seen in N64 Royal Raceway, alongside other sponsors bordering the crowd towards the beginning of the course. This new sponsor depicts represents Birdo, Peach and Daisy together, and it should be noted a second alternative one with the same text also appears on the same track, depicting Rosalina, Wendy, and Toadette. This sponsor also appears in Toad Harbor on some buildings but it only features Peach and Daisy. Interestingly, no old sponsors from previous Mario Kart installments return in Mario Kart 8.

Similarly to the previous installment (Mario Kart 7), Peach's Parasol returns as a selectable glider, which can change colors to an orange color scheme for Daisy and Baby Daisy. A slight modification was given to Daisy's color scheme, where a turquoise ring now surrounds the tip of the umbrella.

The Flower Glider reappears in this game as a selectable glider. This time, however, the glider has received an edit in which its petals are orange instead of white.

A new bike for this game, the Sports Bike, comes in different designs. Daisy and Baby Daisy along with many other characters receive a Princess ORANGE design complete with the sponsor and an orange coat.

Daisy's horn sound is unique, different from Peach's one, whereas Rosalina has the same as Peach's one.

Daisy can be seen on the back of the trophies used for DLCs 1 and 2:

A new feature introduced in Mario Kart 8 are stamps that can be collected throughout the game. They can then be used on posts for Miiverse. Daisy and Baby Daisy, like other racers, have their own stamp. They can be obtained if you win a Time Trial race against the staff ghost of the circuit with the character you choose. The Daisy's giant cake stamp from the Sweet Sweet Canyon race can be won if you win the race in Time Trial mode too against the staff ghost of this circuit. 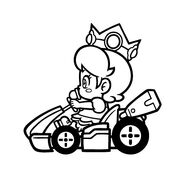 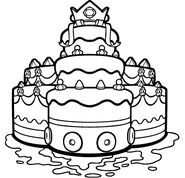 ​In Grand Prix, only the original 4x4 grid of 16 characters have rivals, which always appear in the GP as the front-running characters, often coming in 1st, 2nd, or 3rd place, regardless of the items and obstacles in the race. In Mario Kart 8, Daisy's two rivals are Peach and Waluigi. Daisy appears as a rival for Luigi and Wario.

The Peach Parasol also returns from Mario Kart 7, again Daisy receives her own coloration which is shared only with Baby Daisy.

Daisy's Peach Parasol
Add a photo to this gallery

☀ The Prancer vehicle has a small metallic flower emblem on the back of all Prancer karts. This resembles Daisy's floral gem on her crown:

☀ Daisy's coloration for the Peach Parasol now has a small turquoise ring surrounding the top, which the previous entry, Mario Kart 7, did not have.

☀ Daisy has a 100% chance of screaming, "Whoa-ohhhhhhh!! Yeaaah!!!" if she accelerates early on in the countdown to start a race. This may possibly be an error, as the clip that plays seems to be a very happy and positive reaction (It was first used in Mario Kart: Double Dash when Daisy would go through a cannon in DK Mountain or Rainbow Road), where 'burning out' is supposed to be a negative event. This is called "burst engine".

☀ This is the first Mario game in which Baby Daisy is a default character and uses a different emblem from Daisy:

Retrieved from "https://we-are-daisy.fandom.com/wiki/Mario_Kart_8?oldid=53707"
Community content is available under CC-BY-SA unless otherwise noted.