We Are Daisy Wikia
Register
Don't have an account?
Sign In
Advertisement
in: Games, Mario Kart, Mario Kart Wii,
and 3 more

Baby Daisy makes her debut in this game. She is unlocked by obtaining a one star rank or better in all 50cc Nitro cups (Mushroom, Flower, Star, and Special cups respectively) or by playing 1,950 races. Princess Daisy and Baby Daisy are voiced by Deanna Mustard in this game.

Unlike other Mario Kart games, there are no weight classes. Instead, the characters are divided up into size classes. Daisy falls into the Medium-sized group along with Mario, Luigi, Peach, Yoshi, Birdo, Diddy Kong, and Bowser Jr. Baby Daisy is a Small-sized character along with the other baby characters, Toad, Toadette, Koopa, and Dry Bones.

This is the first Mario Kart game to include bikes as vehicles. When Daisy rides on a bike, she wears a biker outfit instead of her usual attire. The same applies with Peach and Rosalina. Baby Daisy wears her regular outfit when riding bikes.

Something unique to Mario Kart Wii is that every character in the game has their own unique stat bonuses. These stat bonuses will boost certain stats for their vehicles.

Daisy Circuit is the first course in the Star Cup and so far has only appeared in Mario Kart Wii. This is the second Mario Kart course dedicated to Daisy. The most prominent features of this course include the unique sunset beachside setting, with a small village encasing two giant golden statues on which one depicts Luigi and Princess Daisy dancing, holding hands, while the other statue shows Baby Luigi and Baby Daisy, in a similar fashion holding each others' hands. This circuit doesn't have any obstacles outside of a few traffic cones (that cannot harm players), so the track is relatively easy. The circuit may have took inspiration from real-life "Circuit de Monaco".

The emblems can be seen on the side of the boats, between the two windows.

Closer look of the yacht

Block Plaza is one of the new battles courses introduced in Mario Kart Wii. The arena features four platforms, including statues of Mario, Luigi, Peach, or Daisy. Daisy's statue is located on the yellow platform. These statues will disappear once there is only a minute remaining in the battle. 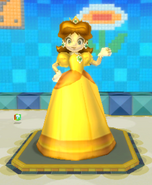 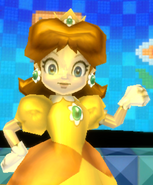 Daisy's emblem appears on the pillars throughout the course.

Daisy's love for candies and patisseries would expand in future Mario Kart games.