Daisy is one of the ten playable characters (two of which are unlockable). In the game's intro, Daisy and Luigi are seen taking a walk together, where Daisy puts her hand to her mouth and Luigi makes hand gestures. When a bubble with a letter floats down, Peach examines it, while Daisy is quick to follow and see what is going on, gathering close to Peach. Soon, everyone gets put in a bubble, and Daisy can be seen floating alongside the rest of the cast towards the Party Islands. The game then proceeds to the title screen, where each character is shown in a bubble. Daisy's bubble is directly up left from the Mario, who is seen in the center. 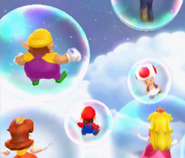 If Daisy is able to successfully beat Bowser, Daisy celebrates at the top of the tower in a brief scene (pictured right)

Mario Party: Island Tour features collectibles in the form of bubbles accompanied by an image. Once unlocked, the collectible can allow the player to listen to music used in the game. Below are all of the collectibles which feature Daisy in their preview image.

Each character received a random image of a "memory", which plays some of the character's voice clips upon selection. Daisy's memory has her posing in victory (the same pose she would make if she got 1st place in a minigame) at the end of the Star-Crossed Skyway board. A faint rainbow can be seen in the background.

Daisy is pictured running along spaces on the Star Crossed Skyway gameboard. In particular, Daisy is seen on the second island encountered on the board, which features lush green grass and flowers. The other islands encountered are clouds and a dark negative zone, so it can be seen why Daisy was chosen to be pictured on the island with flowers and vibrant growth.

Daisy is pictured in a green hot air balloon next to Peach (who is in a red hot air balloon), along with a Blue Toad at the bottom who is hosting this game's optional Minigame mode challenge, named Hot-Air Hero.

Some minigames directly or indirectly reference Daisy. Below are all of the references spotted throughout the minigames of Mario Party: Island Tour:The Choicest Voice is an Extra minigame that cycles through character artwork before randomly stopping on any of the playable characters. The game will then play some sound clips from Daisy.

The player will be asked to try their best to mimic the same sound clip through the 3DS' microphone. A panel of judges will then give the player points based on homology to wavelength and pitch peaks.

In the Match Faker minigame, players are given a few seconds to take notes on the bottom screen with the stylus, which can help them remember the enemies shown above. Depending on who the player is playing as, the bottom screen will have a different customized notepad, where Daisy's shows Daisy's emblem imprinted on the bottom notepad (pictured right)

☀ Towards the end of the Star-Crossed Skyway board, some of the tiled spaces have a + shape (with rounded edges at the ends) in the middle of them. This shape resembles the surrounding petal's shape on Daisy's crown. It is further interesting when one considers Daisy's memory bubble takes place on the same Star-Crossed Skyway board, although this is all most likely just a coincidence.

Daisy and friends in the ending screen

Daisy and friends on the character select screen

Daisy on the title screen
Add a photo to this gallery

Retrieved from "https://we-are-daisy.fandom.com/wiki/Mario_Party:_Island_Tour?oldid=53858"
Community content is available under CC-BY-SA unless otherwise noted.