Mario Party 3 is the third installment in the Mario Party series and the last one released for the Nintendo 64.

This game marks Daisy's first appearance in the Mario Party series as one of the eight playable characters. Like Waluigi, Daisy is only playable in Party Mode. In Story Mode, Daisy represents the Beauty Star Stamp. In the story mode, she slapped Bowser in the face and sent him soaring into the sky, simply because he was "in her way." This action was well received by fans and is commonly said to be the reason why Bowser does not usually try to capture her.

Similarly to in Fortune Street, Daisy is portrayed as arrogant, competitive, flirtatious and belligerent. For example, Daisy flirts with the fake Millennium Star (the host of the game) and causes him to fall in love with her (in an attempt to trick him into giving her the Beauty Star Stamp.) Once she is defeated and her opponent gains the Beauty Star Stamp, Daisy shows a more temperamental and bratty side to herself, when she throws a tantrum and runs off. Daisy is voiced by Jen Taylor for the first time.

Every character in the game has a favorite item. Daisy's item of choice is the Cellular Shopper. This item allows the player to call Toad or Mini Bowser's shop at any time in order to buy items and have them sent to the player.

Each character has his/her own Duel Partner. Daisy's partner is the Snifit. The Snifit is paid 5 coins per lap and can find two to four coins each lap. His characteristics: 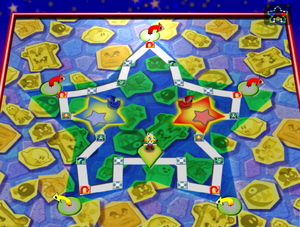 Backtrack  is an unlockable board on which the player will have to duel Daisy in Story Mode in order to win the Beauty Star Stamp. The Backtrack's unique feature is the Reverse Spaces. When someone lands on one, it will cause the players to go in the opposite position and changes the positions of the player's partners. It is the smallest board in the game.

Daisy's artwork from the title screen 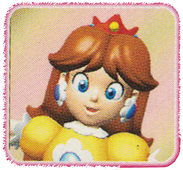 ☀ In the minigame M.P.I.Q (Mario Party IQ) the player will occasionally be asked "Who is the princess of Sarasaland?"

☀ Mario Party 3 is the first game in which Daisy mentions her father. She also mentions that she's never lost to him.

☀ This is the only game where Daisy is shown to have a connection with the Snifit species.

☀ The bottom of Daisy's dress differs between her artwork and her in-game model: in the game, there are little tips between the big patterns which don't exist on her artwork.