Mario Party 4 is the fourth installment in the Mario Party series and is the first Mario Party released on the GameCube. The game was released in October 2002 in North America, and in November 2002 in Japan, Europe, and Australia.

This game marks Daisy's second playable appearance in the Mario Party series. She is one of the eight playable characters. Daisy was also redesigned in this game, and this design has been kept in Mario games ever since. Daisy is once again voiced by Jen Taylor.

When playing as Daisy, it's her birthday! Toad, Koopa, Goomba, Shy Guy, and Boo want to give Daisy presents, but Daisy must play on their game boards as well as defeat them in special minigames in order to win the presents. Once Daisy wins all her presents from the hosts, Bowser shows up and threatens to steal Daisy's presents. Daisy must play on Bowser's board and win. She accepts this challenge.

Daisy manages to win, and Koopa Kid congratulates her. But Bowser tricks Daisy into believing that he stole all of her presents, and must defeat them in a battle. Daisy wins, causing Bowser to run away and leave a present behind. Koopa Kid says that Bowser never stole any of Daisy's presents. Toad says that there is still one more present for Daisy. A constellation of Daisy appears via cutscene.

In the Present Room, players can view the presents they won for each character in the Story Mode. Daisy's present room features flower-themed furniture.

Daisy's present room has floral wallpaper and a pink carpet with orange petals. Different types of flowers hang on her wall showing her characteristic fondness for flowers and beauty. The shape of her present room seems to be inspired by Middle Eastern architecture. As Princess Peach's present room resembles her castle, Daisy's castle may look similar to her own room. When viewing Daisy's side table, the player is warned not to look in her journal. If the player views the table, they will see a Japanese copy of Mario Party 2 inside.

A manga was released for Mario Party 4. Daisy appears on many pages. 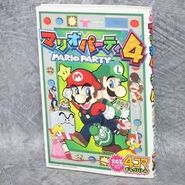 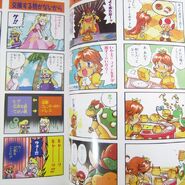 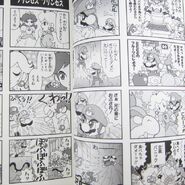 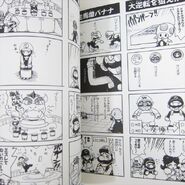 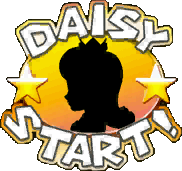 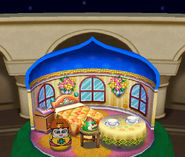 Mario Party 4 - Daisy Ending
Add a photo to this gallery

☀ In the manual of this game, it is stated that both Luigi and Waluigi have a crush on Daisy.

☀ There is an error on Daisy's Doll. The doll's panniers are shown to be deep pink, similar to the panniers on Peach's dress. Daisy's panniers and accents on her dress are supposed to be orange.

☀ The beta version of the boxart features Daisy with her old design. The character renders are reused from Mario Party 3's boxart, so this boxart was most likely just a placeholder until the final version was created.
Retrieved from "https://we-are-daisy.fandom.com/wiki/Mario_Party_4?oldid=46612"
Community content is available under CC-BY-SA unless otherwise noted.