Daisy returns once again as a fully playable character. During a game, if you press the "R" button she will laugh at other characters while saying "Yahoo". She is voiced by Jen Taylor.

This is a list of the names given to a team featuring Daisy. The names give hints to Daisy's relationship with said teammate. 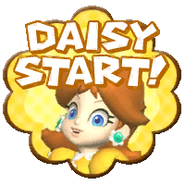 Add a photo to this gallery
See the Mario Party: Gallery.

Retrieved from "https://we-are-daisy.fandom.com/wiki/Mario_Party_5?oldid=53853"
Community content is available under CC-BY-SA unless otherwise noted.