Mario Party 6 is the sixth Mario Party home console instalment and the seventh instalment overall. Princess Daisy is one of the eleven playable characters and her vocal talents are used by Deanna Mustard.

In this game the microphone makes its debut as a Mario Party gimmick. You can play bonus minigames with it. The team names from Mario Party 5 return. The only addition is Daisy and Toadette. Their team name is Shopping Buddies. When you press the "R" button, Daisy will laugh at other characters while taunting "You know I'll win".

It Came From The Deep (Treasure Trawlers)

Daisy on the title screen 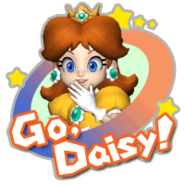 Retrieved from "https://we-are-daisy.fandom.com/wiki/Mario_Party_6?oldid=54155"
Community content is available under CC-BY-SA unless otherwise noted.