Daisy is one of the twelve playable characters in the game. This game works on the team system. Like in Mario Kart: Double Dash!! , Daisy is teamed with Peach. They share a Character Orb, the Flower Orb. With this Orb, spaces ahead of you will change into flower spaces, allowing you to avoid traps. You get three Coins for every space you move. 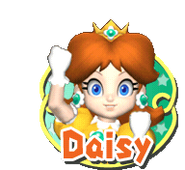 In-game Model
Add a photo to this gallery

Retrieved from "https://we-are-daisy.fandom.com/wiki/Mario_Party_7?oldid=52609"
Community content is available under CC-BY-SA unless otherwise noted.