Mario Sports Mix is a follow-up of Mario Hoops 3-on-3. Mario Sports Mix is a game released for the Nintendo Wii in 2010 for Japan and 2011 for the rest of the world. In this game, four sports are available to play; basketball, volleyball, dodgeball, and hockey. Daisy appears as a default character and she is a Technical type character like Peach.

Basketball: Daisy creates a garden with a fence around the hoop. This limits other players' movement. Daisy can choose to either throw the ball curved right or curved left.

Volleyball: Daisy creates a garden that fills the opponents' field. This way, the opponents can't see where Daisy is aiming the ball.

Dodgeball: Daisy creates a garden that fills the opponents' field, this way, the opponents can't see where Daisy is aiming and their movement will be slightly limited. When Daisy has thrown the ball, she can still move the ball while it's levitating, as the blue aiming field will work as a magnet for the ball.

Hockey: Daisy creates a garden with a fence around the goal. This limits other players' movement. Daisy can either choose to shoot the puck curved right or curved left.

In Dodgeball, Petey appears on the left or right side of the court, depending on which side the players are on. Petey will occasionally spit out a giant puddle of goop (sludge), which will trip players up and momentarily stuns them.

When playing Basketball on this court, all hoops are replaced by Petey Piranhas. Occasionally they will fall asleep, making it easier for players to earn points.

In hockey, Petey Piranha will randomly appear on one of the six circles found on the court. Occasionally, he'll change his position and move to another circle. If Petey Piranha is hit with the puck, he will spit out a puddle of goop.

Something strange about this court is that Daisy Garden isn't playable for volleyball in exhibition mode, it is only playable in the secret road of the Flower Cup, while unlocking Tennis-wear Daisy. This is the only court to have this trait.

Feed Petey is a party game in Mario Sports Mix which takes place in Daisy Garden, DK Dock, or Wario Factory. the sport used is Basketball and can be played with up to 4 players.

There are two methods to unlocking Daisy's tennis-wear:

2: Clear the Tennis-wear Daisy mission in the Flower Cup.

Mario Sports Mix features an unused sport, called Tennis. Daisy can be seen playing tennis. This was created by deexie on DeviantArt. 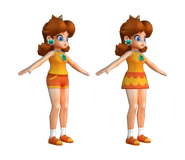 Daisy on the Character select screen

Daisy in her tennis wear

Daisy in the opening
Add a photo to this gallery

Retrieved from "https://we-are-daisy.fandom.com/wiki/Mario_Sports_Mix?oldid=54831"
Community content is available under CC-BY-SA unless otherwise noted.