We Are Daisy Wikia
Register
Don't have an account?
Sign In
Advertisement
in: Games, Sports games, Amiibo,
and 4 more

Mario Sports Superstars is a Mario sports game for the Nintendo 3DS, announced during the Nintendo Direct of September 1st, 2016. Daisy is one of the eighteen playable character. The game features a total of five sports, which are represented on the box art: tennis, golf, baseball, soccer, and horse racing. Daisy appears on the box art representing horse racing.

Daisy is a Technique type in baseball, soccer/football, and horse racing. For tennis only, Daisy is a All Around type like in Mario Tennis: Ultra Smash. The game also has amiibo support, in the form of amiibo cards. Every playable character has a total of five different amiibo cards, one for each sport.

Daisy has her own sponsor: 'Princess Radio', and shares one with Princess Peach called 'Sportswear':

The Princess Radio sponsor has an "On air" sign on it, meaning that the competition is retransmitted by Daisy's radio.

In this game, characters have their own emblems for each collective sport. Daisy's team emblems are as follows:

Daisy's ball launch types are the Screwball, the Forkball and the Curveball

Daisy's crown can be unlocked for horse racing as an accessory for your horse to wear.

In this game, Daisy's amiibo cards and figure are compatible. This is what they add to the game:

The Daisy amiibo figure will allow you to obtain three virtual cards to add to your collection. You can do it once per day with each amiibo figure. Some cards represent sport accessories and they can be chosen for the sport. For example if you get Daisy's soccer ball card, you will be able to play with Daisy's soccer ball in soccer. The Daisy gears collection is called "Flower".

The amiibo Cards can be used to turn your characters into Superstar characters as well as unlock gear. 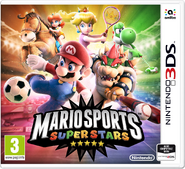