We Are Daisy Wikia
Register
Don't have an account?
Sign In
Advertisement
in: Mario Strikers, Games, Sports games, Article Stubs

Daisy appeared in Super Mario Strikers as a playable offensive captain. She starts in orange and her team number is 9. Her gear exists of two pieces: a jersey and shorts. She also wears soccer shoes. Her super strike is called the Torpedo Strike. When she performs it, little Daisy emblems can be seen behind the ball. Daisy's stadium is called The Palace, which has a seating capacity of 15,000 people.

"Daisy is a defensive powerhouse, fast and physical. Her crystal ability can shield her efforts and devastate opponents." -Daisy's site bio for Mario Strikers Charged

Princess Daisy appeared in Mario Strikers Charged Football as a Defensive character type with high Movement (which affects her movement speed) and Defence (which determines her defensive capabilities on the field) but low Shooting and Passing ability. She starts again in orange with her team number again being 9. This time, she has an alternate viridian green-coloured gear. Just like in Super Mario Strikers, Daisy says "Daisy!" when she is selected, however most of the voices are recycled from Mario Kart 8, including Daisy's, and she was voiced by Deanna Mustard in that game. Daisy has also been given new voice clips specifically for the game. Her gear seems to reference to the gear in the first instalment, but therefore has added armour during the game. Like in other Mario instalments, Daisy has alternate colours, which can be chosen as lime-green, red, lavender, cyan, chartreuse yellow, blue, turquoise, navy-blue, indigo, violet, fuchsia, green, purple, pink, white and black.

Daisy has her own Super Ability, Crystal Smash!, which covers the surrounding ground with sharp orange crystals, blasting away anyone in the range, while her Crystallized Daisy Mega Strike involves her shooting into the air and generating a crystal gauntlet on one of her arms, which she uses to punch the ball towards the goal. In the game's Striker Challenge Mode, Daisy faces against both Peach and Waluigi. She then battles Peach to take the Star Cup championship, and she takes on Waluigi to see if she can get the Brick Wall award for an unprecedented fifth straight year.

References To Other Instalments 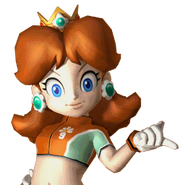 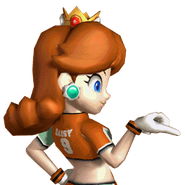 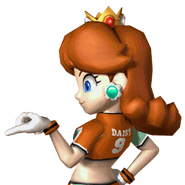 Daisy being tackled by Peach in the opening

Daisy when entering the field 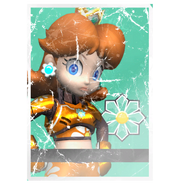