Besides Fan-made Games, Princess Daisy has also been made playable in various official Nintendo games with the use of mods. This page aims to find and list the most important and interesting mods.

Mario Kart Wii can be modified through hacking the Wii system to make "custom tracks" by applying different textures and effects. Here are a few courses submitted to replicate Daisy.

Daisy Gardens is a fan-made racecourse that is playable on Mario Kart Wii and can be downloaded online. On the course, the player can drive through the beautiful gardens that belong to Daisy. It was designed by xBlue98 and was created for Princess Daisy. This racecourse is distributed by CTGP Revolution, which is a Custom Track Distribution created by MrBean35000vr and Chadderz. It is released as a custom homebrew application. The CTGP Revolution pack continues the CTGP 4.4 trend of using custom course slots to load custom tracks, and is the first distribution to use a modified menu system to load tracks. It is also the first distribution featuring a custom channel. The distribution supports the PAL, NTSC-U and NTSC-J versions of Mario Kart Wii. The entire route is located in a large garden which is supposedly located in Sarasaland. It includes a section where you can go through fields of flowers and tulips, an underwater realistic pond section, but also the main garden area, which is surrounded by a giant ivy plant where, later, you can go through it by going on some paths made of ivy. The track comes with custom music: Mario Golf: Toadstool Tour - Cheep Cheep Falls

Daisy Hills from Mario Kart 7 was originally designed by Nintendo and was ported to Mario Kart Wii by CTGP Revolution and is playable via downloadable content from CTGP.

A person named Hypershell has created a hack called Super Daisy Land. This mod allows players to play as Princess Daisy in Super Mario Land. The objective of the game is to travel through Sarasaland in order to rescue Luigi from Tatanga.

An unreleased mod for Super Mario RPG by justin3009 adds Daisy (with her classic design) to the game as the sixth character. 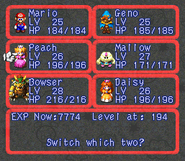 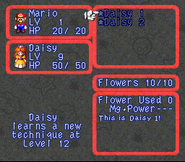 This is a mod created by Ankle Destroyer which allows you to play as Daisy in Super Mario 64, called Super Daisy 64. The mod features an N64 style Daisy model, a Daisy sprite from Mario Kart: Double Dash!! to indicate her number of lives and a wide amount of voice recordings. The in-game text still calls the player Mario though. Her model is inspired from her current look whereas at the time Super Mario 64 was released she had her old look.

A mod for Paper Mario: The Thousand Year Door has been created by Tyshy Development named Paper Daisy: The Flower Princess. The mod changes multiple things about the game, including characters, textures, music, dialogue and the story. The game begins when Daisy and Princess Eclair, receive a letter from Daisy's daughter, Princess Blossom, informing her of a treasure map she bought from a merchant. She then invites Daisy to Port Sarasa.

Upon arrival, Daisy notices a female Goomba named, Goomberly being threatened by a villain named Lord Lester. She then notices her daughter, Blossom, is missing and her and Goomberly set off on their quest to find her.

These are some texture mods for Daisy created by Thunderlina. These were made specifically for use with the Dolphin emulator.

Classic Dress Daisy
Add a photo to this gallery

If that doesn't work you may need to rename the files.

Unfortunately, a download link has not been made available.

StupidMarioBros1Fan has created a similar mod. The mod does not include a voice pack, and therefore uses Peach's voice clips for cutscenes.

A mod for Super Smash Bros. Melee gives the player a costume for Peach which resembles modern Daisy.

Most of the Daisy mods are for Peach, but one specific mod of Daisy in her sports outfit was for Zero Suit Samus.

Baby Daisy mods also exist, one includes her as a Ness mod. Another mod of her and Baby Peach together as the Ice Climbers also exists.

One of the various mods of Daisy in her dress

Daisy in her sports outfit mod

A mod for Melee Daisy has been created by a user named Giroettue. This mod is over Peach and changes her skin tone, crown and jewellery to match Daisy's.

An updated version of this mod created by a user named amphetavin.

There is also a mod which recolours the Daisy mod by KTH to look like classic Daisy.

This Daisy mod created by KTH  is based on a Daisy mod that was released a while back for Super Smash Bros. Brawl.

The mod also comes with an optional voice pack, changing all of Peach's voice clips to Daisy's.

These palette swaps for the model have been created by Raph Savoie. They include a palette swap based on Peach's seventh alternate costume and a black and red costume.

Additionally, this mod has been updated by MortalKgamer. It gives the Daisy mod better eyes, a tennis racquet, a new voice. and several palette swaps.

A mod for Rosalina inspired by Daisy has been created by a user named ELITE9. This mod shortens Rosalina's hair as well as changing the colours of her dress, crown and jewellery to match Daisy's.

A user named Pooterhead has created two Daisy mods for Christmas. One leaves Daisy's hair brown, while the other changes it to a more platinum blonde.

A mod by Aaronitmar allows players to play as an amber version of Daisy.

A mod which gives Peach her outfit from Mario Strikers Charged Football includes a palette swap which gives it Daisy's colours.

There is a mod for Super Smash Flash 2 version 0.9 created by BDSPD9 which adds Daisy to the game. The mod is currently incomplete. It goes over Peach.

Unfortunately, a Download Link has not been made available.

A Daisy mod for version 0.9 by Dorien Brundage adds Daisy to the game. The sprite resembles that of Peach's one but has shorter, brown hair, an orange dress and green jewellery to replace Peach's blue jewellery. Daisy's gloves are the same length as Peach's gloves. Like the mod by BDSPD9, it is currently incomplete.

A download link has not yet been made available.

A mod Created by RafaMario,

A mod for Bronze Orange Daisy has been created by RafaMario.

You can play as Daisy, Peach or Rosalina in Sims 4 thanks to this mod.

Retrieved from "https://we-are-daisy.fandom.com/wiki/Mods?oldid=54377"
Community content is available under CC-BY-SA unless otherwise noted.