We Are Daisy Wikia
Register
Don't have an account?
Sign In
Advertisement
in: Outside Reference, Games, Baby Daisy,
and 3 more

Super Smash Bros. is a series of crossover multiplayer fighting games consisting of characters from various Nintendo franchises. This series is popular with both casual and competitive players. Prior to her announcement in Super Smash Bros. Ultimate, Princess Daisy's inclusion in the series was among the most discussed and debated topics in the community. In earlier installments of the series, Daisy appeared through multiple references by Princess Peach, and has had several trophies.

While not playable in Super Smash Bros. Melee, one of Peach's alternate costumes strongly resembles Daisy. Peach has Daisy's hair color as well as Daisy's dress, crown and the shorter gloves. The floral motifs are also present, which Peach's Daisy costumes in later Super Smash Bros games do not have this. Peach also has Daisy's tanned skin, a feature Daisy only had during the Nintendo 64 era. The hair style however still resembles Peach's.

A Daisy trophy can be randomly unlocked in the Lottery or in Classic, Adventure, or All-Star Mode. The trophy depicts Daisy as she appears in Mario Party 3 renders. Her trophy states that she appeared in Mario Golf on the Nintendo 64, but this is not true. She did appear in Mario Tennis on the Nintendo 64 however.

The princess of Sarasa-land, Daisy met Mario when he helped defeat the evil alien Tatanga in Super Mario Land. Princess Daisy is a bit of a tomboy when compared with her counterpart, Princess Peach. After her appearance in Mario Golf, some gossips started portraying her as Luigi's answer to Mario's Peach.
Super Mario Land
8/89

In Super Smash Bros. Brawl, Daisy is not playable. Due to Daisy's redesign, Peach's Daisy costume in this game no longer resembles Daisy and instead just has Daisy's color scheme.

Daisy has one trophy in her attire from Mario Strikers Charged. Daisy's trophy description has an error in it, as it mentions that her iconic look is a yellow and white dress. She no longer wears this dress however and instead wears a yellow and orange dress.

Daisy also appears on two different stickers in this game. One of the stickers features her from Super Mario Strikers, and the other features her and Peach from Mario Party 7. The Super Mario Strikers sticker is medium-sized, and it gives +5 attack to leg attacks for all characters. The Mario Party 7 sticker is large-sized, and it gives +27 attack to leg attacks only for Peach and Zelda. 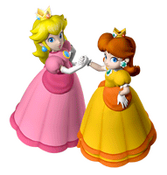 The princess of Sarasaland and an upbeat and cheerful go-getter. She has appeared in titles ever since Mario saved her after her kidnapping by the tyrannical alien, Tatanga. Although her iconic look is a yellow and white dress, she goes with a sportier look in Super Mario Strikers to compliment her spunky scoring strikes.
: Super Mario Land
: Mario Strikers Charged

A remix of the Super Mario Land Underground Theme music appears in Super Smash Bros. Brawl. It is used in the Mushroomy Kingdom stage, but can also be used for custom stages.

Super Smash Bros. for Wii U

In Super Smash Bros. for Wii U, Daisy is again not playable. While she is not playable, there are several references to Daisy.

Like in Super Smash Bros. Brawl, Peach still has a costume with Daisy's color scheme. Peach's hair for her Daisy-inspired costume is a brighter orange compared to the darker orange Daisy's hair normally is. This Peach costume also appears in Peach's clear movie for clearing Classic Mode as Peach.

Daisy's Crown from the Nintendo 3DS StreetPass Mii Plaza mode can be unlocked in this game. It can be worn by the Mii Fighters.

Unlike in the previous installments, Daisy has more than one trophy in this game with a total of three. Daisy has the most amount of trophies out of all the non-playable characters that appear in both the Wii U and 3DS versions of Super Smash Bros. Daisy's trophies in this game consist of Daisy in her usual gown, Daisy in her sports attire (representing the Mario Baseball series), and a trophy of Baby Daisy. Daisy is also mentioned in Wendy's trophy, where's it stated that Wendy considers her as a rival.

Daisy's Baseball Outfit trophy makes an appearance in Smash Tour. When the player selects it, he/she is given immunity to any items or projectiles.

While Daisy isn't officially a playable character in Super Smash Bros for Wii U, a French programmer known as KTH has created a mod of Daisy, which is a palette swap for Peach, similar to the Koopalings and Alph for Bowser Jr. and Olimar. A voice pack has also been released separately from this Daisy mod. The voice clips feature Deanna Mustard's portrayal of Daisy. Her name is seen below her icon during battles and the off-voice calls her by her name if the player wins a fight while playing as Daisy.

Similar to Super Smash Bros. for Wii U, except Daisy has only one trophy in this game - an exclusive trophy to this game based on her Mario Tennis Open appearance.

Like in past Super Smash Bros. games, an alternate costume for Peach based on Daisy also makes an appearance. This costume is used for Peach's alternate trophy. This trophy will be awarded for beating the All-Star Mode as Peach.

At E3 2018, Daisy was confirmed to be an unlockable playable

character in Super Smash Bros. Ultimate. She is an Echo Fighter of Peach, and is also an unlockable fighter. She essentially has Peach's moveset but with a few aesthetical changes to match her tomboyish personality. Daisy's character number is 13ε. She is the 8th Super Mario character to be playable in the Super Smash Bros.

A Super Smash Bros. series amiibo of Daisy has been released as of April 2019.

☀ Early copies of Super Smash Bros. Melee show Daisy's infamous "Third Eye" when viewing her trophy at a certain angle and zooming into Daisy's hair. The third eye is located underneath her hair and looks different from the other eyes used on Daisy's trophy. This is fixed in later copies of the game.

☀ Peach's clear movie for Classic Mode in Super Smash Bros. Wii U references Daisy by using Peach's Daisy costume in it. One scene involves the regular Peach and the Daisy costume floating away from a Chain Chomp, and the other scene depicts the Daisy costume grabbing Luigi.