We Are Daisy Wikia
Register
Don't have an account?
Sign In
Advertisement
in: Daisy's courses, Locations, Mario Kart 8,
and 3 more

Sweet Sweet Canyon is a course that appears in Mario Kart 8 and Mario Kart 8 Deluxe. It is the third course in the Mushroom Cup. While the course isn't named after any specific character, this course is considered by many to be a Daisy and Peach course, as there are plenty of references to both of them. Sweet Sweet Canyon is a dessert themed course full of many pastries and sweets.

In the audience stand at the beginning, new characters can be seen, some being gingerbread Toads. While they have not been given an official name yet, they are clearly Toads made out of gingerbread cookies. These characters so far have only been created for use in Mario Kart, and whether or not they will make an appearance outside of the Mario Kart franchise is currently unknown.

As mentioned above, Sweet Sweet Canyon has plenty of references to both Princess Peach and Princess Daisy. At the beginning of the course, the gingerbread men and gingerbread Toads can be seen towards the left of the starting line. They are standing in three spectating boxes. The box all the way to the left has a pink and green color scheme, with magenta hearts on the bottom, referencing Peach. The box in the middle is orange and brown and has orange floral symbols on the bottom, referencing Daisy. The third box is not specifically based on Peach or Daisy, but has their Royal Patisserie logo on it just like on the other two boxes. The Peach and Daisy-themed boxes feature an alternating pattern of Peach's emblem and Daisy's emblem on the top of the boxes. The third box does not feature this pattern. (pictured above).

Shortly after the startling line, racers enter a tunnel composed of a sweet of some sort. A detail of note is the material used to line the sides of the tunnel. It appears to be a white lace-like liner, often found in table cloths or coasters. The pattern for this lace resembles a flower with eight petals. This lacing can be seen in other parts of the course as well, although it is most prominent here.

On the image to the left, a giant three-tier cake is can be seen, and players race around for a short portion of the course. The top of the cake features a crown. The green gem surrounded by petals on Daisy's crown can be seen, along with a ruby (from both Peach and Daisy's crown) and a sapphire (from Peach's crown). The bottom of the cake has donuts that are yellow-orange and green, which could reference Daisy's color scheme. Towards the top left of the image, on a piece of confectionery, there are flowers holding together material of some sort. The pink flowers come in five petals each, and appear to be blossoms, so are more likely referencing Peach and her affiliation with Peach blossoms.

The giant cake itself is also surrounded by orange liquid, and giant green bottles with "Princess ORANGE" on it can be seen. The racers are not racing in water, but instead could be racing in orange soda or orange juice, making Sweet Sweet Canyon the only Mario Kart 8 course with an "underwater" section except the racers are driving in a different type of liquid.

Towards the end of the track, two gingerbread houses next to the windmills can be seen. Both of them share the same details, in which 5 cookies can be seen on either side of the rooftops, with a sixth cookie appearing on the front of the house. What's unique about these cookies is they are cut in a fashion that resembles Daisy's emblem. They have six yellow "petals" with a green center. Additionally, the door knob to the front door of the house has a mini-scaled version of this same cookie. Egg shaped lollipops can be seen next to these gingerbread houses in addition to other parts of the track. The yellow and orange lollipops reference Daisy's color scheme while the pink one references Peach. Another type of lollipop exists on this course, with a circular shape. Of note, some come in a green / orange spiral twist, most likely referencing Daisy's color scheme again (See gallery).

One shortcut is available on this course. Just before the finish line, you can pass under a giant doughnut through an area of chocolate icing if you use a mushroom. 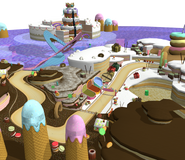 Giant cake with Daisy's crown on top of it.

Part of the course. 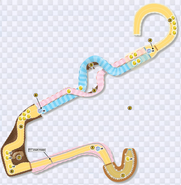 Map of the course.

Daisy in the orange juice section.

Daisy on the course. On the left is a candy house with Daisy's emblem.

Close-up of the giant cake. 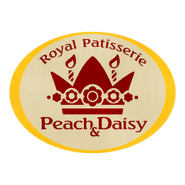 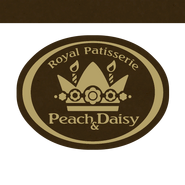