Toad is Princess Daisy's Neutral Special in Super Smash Bros. Ultimate. Since Daisy is an Echo Fighter, she shares this move with her base fighter Princes Peach.

A Toad jumps out in front of Daisy/Peach as she covers in the opposite direction and covers her ears. If the opponent hits Toad, he releases spores from his mouth that deal around 3.5% damage to the opponent as Peach/Daisy winces.

The differences between these two moves are purely aesthetical. In Peach's variation of the move, the iconic Red Toad comes to her aid. Meanwhile, Daisy is assisted by a Blue Toad.  In Peach's covering animation, her eyes are wide open and her expression implies discomfort and fright. In Daisy's covering animation, her eyes are closed but she has an expression of expectation and excitement. However in Super Dragon Smash Bros. Ultimate, Daisy uses a Yellow Toad instead of a Blue Toad, but Blue Toad appears in the Story Mode for talks. Also, in the Mario games, the Toad also has alternate colours.

Like Peach/Daisy Bomber, this move is original to the Super Smash Bros. series. Toads are Princess Peach's servants in the Mario series, with the most recognisable one having red spots. Toads have displayed the ability to spit spores after being hit in Mario Tennis.

Toads haven't been especially associated with Daisy outside of the Smash Bros. series. However, they have been affiliated with her in a few spin-of games. In Mario Strikers Charged, Blue Toad were the colour Toads that represented Daisy's team. Blue Toads can also be seen piloting Daisy-themed hot-air balloons on N64 Royal Raceway in Mario Kart 8 and Mario Kart 8 Deluxe. 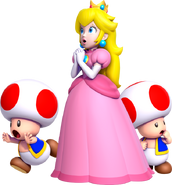 Peach and her loyal servants, the Toads, in her official artwork for New Super Mario Bros. Wii

Blue Toad in a hot air balloon representing Daisy in Mario Kart 8 and Mario Kart 8 Deluxe.
Add a photo to this gallery 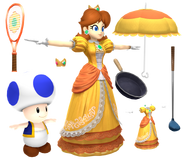 Retrieved from "https://we-are-daisy.fandom.com/wiki/Toad?oldid=53667"
Community content is available under CC-BY-SA unless otherwise noted.